March 27, 2020
Julia P. new song 'Walking On By' has a gorgeous country and bluegrass feel coursing through it along with a beautiful musical arrangement. === Today BlackieBlueBird have released their new album 'Goodbye in July' comprising of eleven refined dream pop tracks each vying for attention. === Certain Animals make their fifth appearance on Beehive Candy in less that a year with 'Love, Space & Time' where their fabulous sixties vibes are once again enticing. === We have the full album from Jed streaming below, it's entitled 'Black Gold Texas Tea' and has nine creative instrumental tracks that cover a good number of styles and genres. === Brighton, England's The Brave Faces have released their debut single 'In The Dark' and it's a really impressive piece that more than suggests the band are one's to listen out for. === Bethany Ferrie has a new lyric video for the extremely catchy and melodic song 'Stayed'. === The Dream Syndicate return just weeks after sharing 'Black Light' with another superb song entitled 'The Longing' the band might have been around for thirty years but this is just so fresh. === Boxes new song is entitled 'Electric Lights' where the Manchester, England band demonstrate a clear talent and ability to create some absolutely stunning country rock.
----------------------------------------------------------------------------------------- 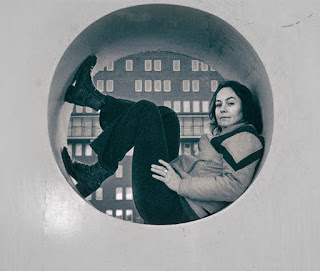 It's never too late to start playing the banjo! Julia P. Hersheimer first got noticed in 1991 with her Twin Peaks Forever cassette. Thereafter many albums, EP's and projects followed. She shared the stage with Paul Weller, toured with dEUS and Daryll-Ann, was featured on the internationally acclaimed Eurosonic Noorderslag showcase festival, on famous Dutch festivals like Crossing Border and Lowlands, and on Dutch national TV.

In 2017 Julia P. released the ‘Summer EP’ to international acclaim - four sunny tunes about beaches and waves - and in that same year the ultimate Christmas tune ‘Christmas Is Calling’, which rode high in the alternative Christmas charts.

Julia P. always wanted to play the banjo. It took her 53 (!) years to finally buy one and take lessons.

New single Walking On By is the first banjo recording and it has a definite jingle jangle country/bluegrass vibe, somewhere in between Mumford & Sons and Gillian Welch. It is a song about the longing for long gone times when the sun always seemed to shine and life was peaceful and innocent. 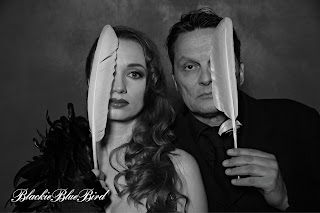 Copenhagen's dream pop duo BlackieBlueBird return with their second album "Goodbye in July". BlackieBlueBird are the vocalist Heidi Lindahl and the composer Nils Lassen; together they create delicate torch songs of reverb and echo that captivate the listener with resonating guitars, wailing harmonicas, maudlin mandolins and a choir of lonely mermaids that sporadically embraces Heidi's golden voice. The echoes of love and longing, hellos and deceiving goodbyes live within her unique and clear vibrato.

BlackieBlueBird are now back with their second album "Goodbye in July" which leverages the dreamy romanticism but preserves the melancholy of their first work. Lead by the delicate and enchanting voice of Heidi Lindahl "Goodbye in July" comprises 11 songs of desire, love, life, and losses written by the experienced composer Nils Lassen.

The duo received great reviews worldwide for their debut album "Ghost River", where their sound has been compared to Nick Cave's "Murder Ballads" and Enya.

All songs are written and produced by Nils Lassen. The album is a cooperation among T&E Records, Poisonic, and Aenaos Records. "Goodbye in July" will be released on Vinyl, CD, and as a download on 27th of March 2020. 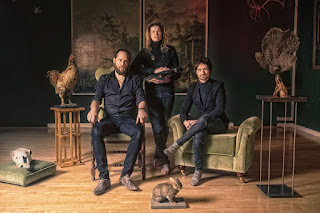 New single Love, Space & Time is a loving, psychedelic trip along the earliest childhood memories to the currently found feeling of unity of Certain Animals. Hhinting to Creedence Clearwater Revival, A reverberated intro easily glides into a droning riff which could have been taken from an unused B-side of The Beatles' Rubber Soul or Revolver.

Three-part harmony vocals smoothly narrate the cosmic fortune and innocence of early youth. Tastefully accompanied by a cowbell, the chorus blasts away with an exclamation full of ambition and perseverance, a driving force of the band. Love, Space & Time is a characteristic example of the new Certain Animals: polyphonic and melodic, but always with an edge.

Without being stuck in the past and with a critical view on the present, the band brings you their intriguing sound which makes for an energetic live show filled with intimate moments and explosive bursts of energy. 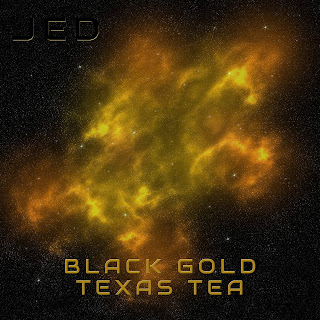 27th March sees the release of the debut album from Jed called "Black Gold Texas Tea". Jed is Jed Stephens a multi instrumentalist with a passion for electronic music of all kinds, his music is a mix of electro, techno, D&B, house and ambient.

He has been a song writer, producer and performer for many years, previous bands include Bass Bandits and Exchange, he is currently in the North West UK based Synthpop covers band Elektrio.

Jed's musical influences range from Sibelius and Bartok through to the Chemical Brothers and Orbital, via The Beatles, Kraftwerk, New Order, 808 State, Frankie Knuckles, Arthur Baker and Vince Clarke. Those old enough to remember The Beverley Hillbillies will recognise the derivation of the album title!

The music on the debut  is modern electronic combining the best of elements of techno with the soundtrack feel of John Carpenter, Vangelis or Jarre. Using the best in modern electronic gear he creates stunning tracks which combine epic sounds with dance rhythms. His live show, complete with laser lighting rig, is stunning, a guaranteed dance fest for anyone who attends. 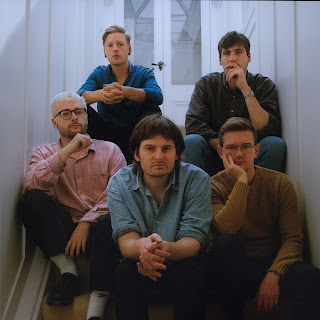 The Brave Faces - In The Dark.

THE BRAVE FACES, Brighton post-punk/indie band, have released their debut single, ‘In the Dark’, with a video to follow.

“In the Dark explores power within a relationship,” says the band. “They’re delivered from the perspective of someone offering up fumbled clichés as apologies, desperately trying to save face after the latest in a series of breaches of trust.”

‘In the Dark’ is the first of three tracks recorded by THE BRAVE FACES with Dave ‘Izumi’ Lynch (Toploader, Jake Bugg, The Magic Numbers) at Echo Zoo Studios in Eastbourne. THE BRAVE FACES will release their next two tracks, ‘Lots of Nights Out’ and ‘It Takes a While’, throughout 2020, alongside a string of live performances around Brighton and London. ‘In the Dark’ was mastered by sound engineer Pete Maher, who has previously worked with U2, Pixies and Nick Cave. 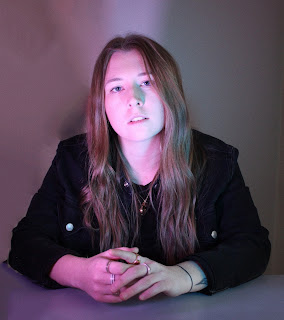 Starting from sending voice notes to her friends in her bedroom as a teen, it’s only in the past year that Bethany has started releasing music and gigging wherever she can. With just her and an acoustic guitar, Bethany brings her pop music to life with hints of Fleetwood Mac, Lewis Capaldi and Ed Sheeran setting her apart from her contemporaries.

About the track: “I had broken pieces of a chorus in my head for weeks. I was at a time in my life where I felt really alone and distant from everyone, and the song actually ended up taking a lot longer to finish because I’m not used to being honest with myself. It’s made up of a lot of little different things; different people, different headspaces.

I think when I was younger, with any kind of relationship with someone, I thought I’d have it forever. Now I’m much more hesitant, I have a voice in the back of my head saying, “okay, this is good. So when does it end?” It’s kind of the moment when you’re getting on with your day and then you see something or hear a song and it takes you back to a time or a person. It just takes that split second to send you back.

I have this little thing on my keyring that someone once gave me and I never took it off. It’s sort of like I still carry them around, but I forget it’s even there until I notice it. Having the guitar through the bridge puts me into that headspace of letting music fill an awkward silence. I kept it instrumental because sometimes you can say too much. I feel ‘Stayed’ is the start of me coming into my own sound as an artist 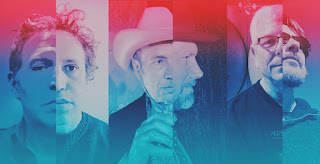 The Dream Syndicate - The Longing.

When The Dream Syndicate emerged in the early 80s, front man Steve Wynn declared, “We’re playing music we want to hear because nobody else is doing it.” He added, “I’ll compromise on what I eat or where I sleep, but I won’t compromise on what music I play.” Both were true, and although their template of Velvet Underground meets Crazy Horse may seem commonplace today (and let’s not forget, the Syndicate spawned many imitators), their raw twin guitar, bass and drums approach was not common during an era when slick, polished MTV bands ruled.

Thirty years later The Dream Syndicate have announced their third album for ANTI-, The Universe Inside, which will be released on 10th April. They have now shared the video for new single 'The Longing', a cryptic clip that explores yearning, memories and the passage of time.

“A friend of mine once said, ‘You ought to write a song about longing,’” lead singer and songwriter Steve Wynn explained of the song’s titling. “This was a few years back but it stuck with me and when I was listening to minutes 20 through 28 of the improvisation that became The Universe Inside I knew that the suggestion had finally found its proper home. This section of music - that followed in real time the part that became “The Regulator” - felt so mournful and lost and adrift and confused, much like longing itself. You think you know where it’s at? The longing is stronger than that.  Our resident visual interpreter David Dalglish picked up on that feeling for a video that connected hauntingly to that feeling of distance and memory. And now?  Suddenly it all feels very much of the moment. A chasm, sleepless for day and days, rootless, unsettled and alone.  All that’s left is the longing.”

This album could have been called The Art of The Improvisers – The Dream Syndicate were in a Richmond studio after midnight working out ideas when Stephen McCarthy dropped by and became a catalyst for uncharted exploration. In one session, they recorded 80 continuous minutes of soundscapes. Wynn took that raw tape back to his NYC home and played the shit out of it and thought, “My god, there’s an album here, damn it!” 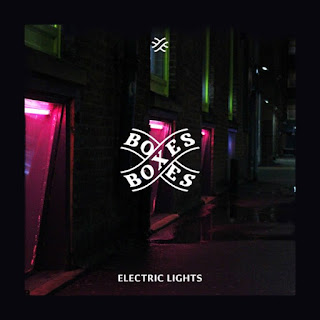 From the band - We're a country rock band based in Manchester, UK. We're a band all about those lyrics, harmonies and riffs.

We can't not make music, i'd be lost without it, inspiration include Luke Combs, Old Domino, Eric Church, Chris Stapleton etc (the list goes on) - we're country but with an English feel, there's a growing scene here in England and we want to be at the forefront of it!

The track Electric Lights is about going on a journey and the fear of being stuck in the same place or situation for too long.