Nashville-based singer/songwriter Samantha Tieger (pronounced “Teeger”) is set to follow up her seductively resonant single “Eyes Wide Open” with a new soulfully sweet entry, “Close My Eyes.”  In a time when friends and family are experiencing isolation and loneliness, “Close My Eyes” holds hope that distances can be closed via a powerful emotional connection. It delivers a very soothing and reassuring pop vibe thanks to Tieger’s effortless and comforting vocals.

Her sweet, soulful delivery and alluring harmonies bring listeners together in a way that is deeply personal and almost magical. “Close My Eyes” was co-produced by multiple Emmy Award-winning producer Ed O’Donnell (Friends, Beverly Hills 90210) and Bobby Campbell, with Tieger and O’Donnell collaborating as co-writers. “Close My Eyes” will be released as a single today, July 31 and will be included on Tieger’s forthcoming six-song debut EP in late summer.

Says Tieger: “The idea for this song was inspired by the friends that I’m physically distanced from and the fact that we’re still always there for each other.

It’s been heartwarming to see how those in my life have interpreted the song in a way that’s personal to them. They’ve told me the song has helped them feel closer to long distance family members and friends, as well as to people in their lives that they’ve lost. Having received such a positive emotional response to the lyrics has been really special, and I’m so excited to share this song with the world.”

Bag of Cans are a five piece indie rock band birthed from the effervescent swamp which is Norwich’s music scene, they have weaved through the musical ranks on a sound described as “a gloriously surreal mix of old school indie, Weimar Berlin cabaret and Kinks circa Village Green Preservation Society”.

Since their formation in late 2017, they have garnered a reputation as one of the must-see bands in East Anglia with invariably hectic live shows. Sinewy guitar lines glide between a relentless rhythm section and a penchant for indie-pop vocal-harmonies.

Recent Activity: 2020 began with a strong start for the cans with gigs peppered around the East of England, including an illustrious support slot for Joe Talbot (Idles) on his DJ set tour. The band even made their way to the semi-final stage of the Isle of Wight Festival New Blood competition, before Covid-19 put a
dramatic stop to their hopes for this year.

Throughout quarantine, the band have been scheming, plotting world domination, and writing madly– though nothing is really filling the hole of live gigs. Most recently they have been featured on a charity live album, raising money for the Music Venue Trust, to try and help the music industry survive these perilous times in any way that they can. Chris Alice is a small token from a band who love what they do but are being forced to bide their time before a large scale assault after lockdown.

Komanda is the English transliteration of the Russian word for “team”. It is the spirit child of U.S.S.R born & Brooklyn, NY raised songwriter/producer duo
Ed Zisk and Phillip Alexeev.

Komanda tell us - The last few months have been pretty weird for all of us. I just want to thank you for giving people good music to brighten their days and get through this weird time.

We've been locked in the studio working on our own form of sunshine. It's the only coping mechanism we have to deal with some of the crazy sht going on in the world, and we hope we can provide music fans with some small beacon of human connection through our tunes. 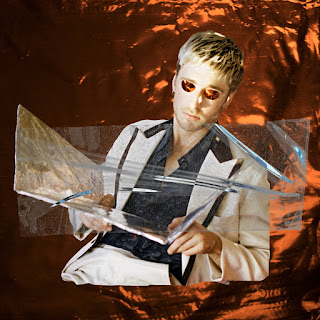 Be No Rain - Media Luna.

London-based artist Be No Rain has announced the release of his debut album, Strawberry Backstory, out September 18th via One Two Many Records. Along with the announcement, Be No Rain is also sharing new single “Media Luna”, a contemplative, stirring study of dread, in all of its various forms.

The third track to be lifted from Be No Rain's debut album Strawberry Backstory, "Media Luna" is a stark, sparsely arranged cut, showcasing a darker side to his synth-pop songwriting. Borrowing its name from the fictional rancho in Juan Rulfo’s book Pedro Paramo, the track is released today alongside a Jacek Zmarz-directed video. Zmarz bought 50 old VCR tapes from strangers online and stitched together clips of the disparate lives; acknowledging the tragedy of a world trapped in stasis and reminding us of the pain this pandemic has caused.

Speaking a little more on the track, Be No Rain said: “As the song developed it became more of a generalised study of dread, that kind of non-contingent fear that lives in the realm of dreams. Or even the dread that arises at 6am, stumbling, cold onto an unfamiliar street, blinking in the dawn as a chemical shroud lifts and every passing thought feels altogether too tragic and terrible to comprehend. Nonetheless, what’s left resounding at the end of the song is a sense of hope. Dread is transient and so are we; with or without our misdeeds the world will keep spinning.”

To understand Be No Rain’s lovelorn take on pop music, you must first know where it is made. A south London studio decked out with disco balls, fairy lights, and fake ivy - in many ways, looks exactly how his music sounds. Kitsch and camp in places, but unashamedly itself. It was in this utopia that Sam Frankl, who records as Be No Rain, got to work tirelessly distilling ideas he’d had over the course of a decade into a shape that represented his eclectic mind.

Taking his stage name name from a Gil Scott Heron lyric from the song “I Think I’ll Call It Morning”, Be No Rain was a name that provided a sense of ambiguity and uncertainty, the latter being a theme that Sam was subconsciously examining in his songwriting.