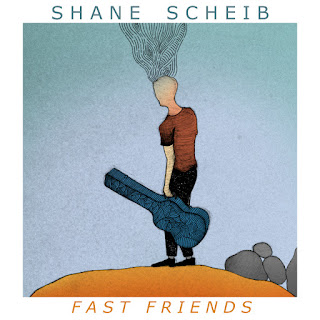 Background promo - Shane Scheib is an indie artist based in Nashville, Tennessee. His music expertly blurs the lines between the energy of alternative rock and the verve of indie-pop.

A creative and forward-thinking performer, Shane is known to produce music with an open heart and an open mind, bridging the gaps between clever arrangements and emotional lyrical wit. His distinctive guitar playing is also the result of lots of labour and dedication: when he was 13, Shane fell in love with the mastery and incredible ability of Stevie Ray Vaughn. He watched the bluesman's legendary live performances on video repeatedly, eventually mastering the blues and rock formula. Later, he took it to the next level as a trained jazz guitarist with a versatile mindset, incorporating influences as diverse as folk, pop and rock into his music.

Shane Scheib’s music is a lot like his humor: it’s witty, playful, and a little introspective at the same time. In his own words, “Fast Friends sounds like Bono Imagined Dragons while playing guitars that had White Stripes and Silversun Pickups; it was Fun.”

One of the most striking and endearing features of Shane's sound is definitely his ability to create songs that are challenging and diverse, yet extremely catchy and easy to relate to for a broad palette of listeners.

Shane's upcoming EP, "Fast Friends", will be released on September 13th, and it will be available through iTunes and Spotify.

First track on the new EP 'Fast Friends' the song 'Run' gives you a good idea of what's in store. Musically it leans more towards, energetic indie rock, with one or two more pop influenced moments. There are plenty of hooks and Shane has an ear for melody, that keeps everything quite accessible, without being to format driven. Overall it's a pleasing EP. 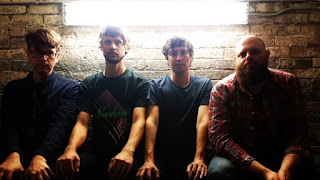 Background - Fresh Snow, an acclaimed instrumental kraut-noise-psych rock quartet, are back with their second full-length album, ‘ONE’. Recorded with Graham Walsh, in a rural Ontario barn, ‘ONE‘ arrives less than a year after their 2015 EP ‘WON’, via Hand Drawn Dracula (Beliefs, Doomsquad, Etiquette) on September 9th, 2016.

With ‘ONE’, Fresh Snow pushes their own boundaries further than ever, creating something more confrontational, yet more accessible, than anything they’ve done before. The band describes ‘ONE’ as an album that is both structured and instinctual, made without ego or fear of alienating its listeners. Noise and texture is always prevalent, however minimalism is newly explored in places throughout the album, alongside electronic treatments, and English / French vocals.

After a split 7″ with SubPop artists Metz (2012), Fresh Snow earned critical acclaim with their 2013 debut album, ‘I’, and landed on the cover of Now Magazine, as well as being listed for the esteemed Polaris Music Prize, and making numerous year end best of lists. Brooklyn Vegan described Fresh Snow’s music as “mutant, motorik psych,” which the Toronto Star’s Ben Rayner also called “transcendental” and “overwhelming in the best sense possible.”

Fresh Snow’s inventive live shows – performances within pods or around projection screens, leading audiences from one room to another mid-show – are legend to those already in-the-know. They’ve performed alongside groups as diverse as Atlas Sound, Tim Hecker, The Pop Group and Ratking, as well as forming a one-off blisteringly loud band with Metz (FrETZ).

As Fresh Snow continue their journey through the ROYGBIV colour wheel – ‘I’ is red; ‘WON’ is orange; and ‘ONE’ is a yellow cover, the distinctive sonic elements that are the band’s trademarks continue to evolve, strengthen and feedback. ONE is filled with dissonance, stillness, intrigue and molten noise, as Fresh Snow continue to look for the beauty that is found in extremes.

'I Can't Die' is one of nine tracks from the 'ONE' album, and is something of a mini epic in it's own right. The album is a fascinating collection of instrumental pieces, with an almost constant theme, in that you just do not know what's gonna come next. Part experimental, the band move from kraut rock to more psychedelic moments, sometimes full on noise rock, and yet everything flows and the melodic moments are just wonderful. Highly creative and enjoyable. 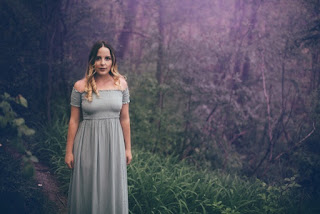 Background - The lyric video was shot entirely at the Scarborough Bluffs in Toronto and was created using a series of cinemagraphs. The video team partnered with Flixel to bring these still images to life. The video was filmed by the incredible team at Public Space Productions. "The Villain" comes from Brooklyn's new album “These Paper Wings”. Out September 9th.

“The Villain” captures the idea of regaining strength and power in a situation where I felt trapped and silenced. As women we are often taught to take full responsibility for uncomfortable situations we find ourselves in regardless of whether we have control or agency within them. When a toxic or abusive relationship breaks down- there are a lot of complicated feelings that come with it. With this song, I wanted to express all of those different angles, but most importantly I wanted to tell a story that presented strength and the ability to overcome. I am not only writing for me here; I am also writing for the startling number of women in my life who I know can relate. Through the lyric video, I wanted to showcase imagery that made me feel strong and powerful, but beautiful at the same time. - Brooklyn Doran.

'The Villain' is the second song we have featured from Brooklyn Doran in recent months and it is another engaging song from the debut 7-track album "These Paper Wings" released in September 2016. Full of melodic numbers and the beautiful vocals of Brooklyn, it's a collection of thoughtfully written material, where the attention to detail ensures seven very individual and absorbing tracks. 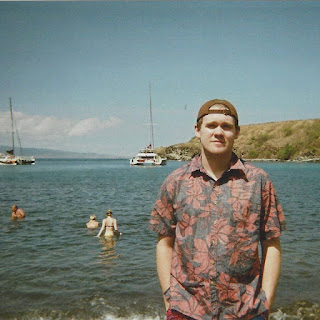 The album was written at a time where he chose to be reclusive out of fear of being hurt or humiliated. He found comfort in creating songs that took the stories he saw in his head and painted them into reality. Alex hopes others may listen and find a similar escape within these songs.

Taken from the new album "Dead, In The Water", 'Paper Mask '16' is the opening track, and as I was not sure which one to feature, it seems a good enough starting point for Beehive Candy. Alex describes his music as "Dark Piano Pop" and in those three words he pretty much sum's the new album up. Deep and sometimes emotional material, may sound like hard going, however the pop element really does lift the material up enough, through melody, a good choice of additional sounds, and a gentleness that soothes. In fact it is because of that, I find myself dipping back into the album, to enjoy a little escape of my own. 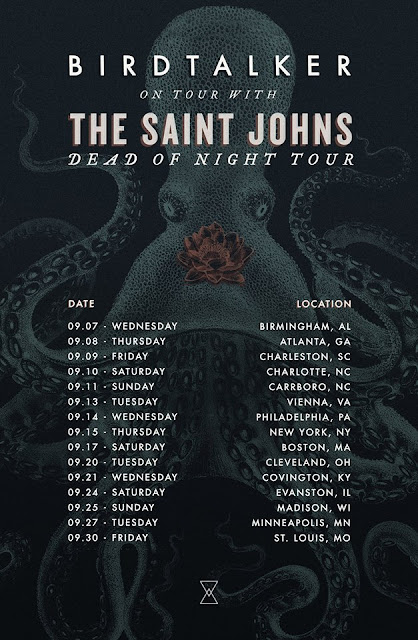 Background - Nashville alternative group Birdtalker has announced it will support The Saint Johns on tour this September. As a duo, Zack and Dani Green of Birdtalker will kick off the tour in Birmingham, AL on 9/7, and close out the shows on 9/30 in St. Louis, MO. See above for a full list of dates.

This tour follows the release of Birdtalker's debut EP, Just This, which was released on 8/19. The Wild Honey Pie premiered the EP, saying that even when the band, "...delve[s] into more uncertain and strained subject matter, they’ll still remind you to 'put what’s heavy behind' and that we 'don’t need no mournful sounds.' Simply put, you feel lighter by the end of this EP than before you began listening."

A few months after marrying, the band’s founders Zack and Dani Green began writing songs together. Neither had pursued music before, however, after finishing their first song together, each felt an electric surge and from that point on there was no turning back. Friends in Nashville began to take notice of the duo’s original tracks, and Birdtalker quickly grew into a five-piece ensemble. Just This EP reflects different themes of adulthood, touching on the evolution of the pair’s marriage, to prioritising what is most important in one’s life.

The six-song EP was recorded in Nashville at Glass Onion Recording Studio with co-producers JD Tiner (Erin Rae) and Dan Fernandez (Great Peacock). In its brief time performing together as a band, Birdtalker has had notable appearances in Nashville opening for The Strumbellas, Escondido, and Marc Scibilia.

Announcing their tour dates seems a reasonable enough excuse to feature another song from Birdtalker's new EP and this time it's 'Graveclothes'. Another reason is the fact that all six songs on the EP are just so good!