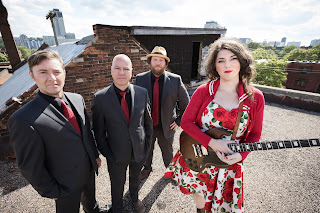 Background - The artist’s strengths as a songwriter, vocalist and performer, memorably showcased on her last studio outing, Every Time My Mind Runs Wild, are even more evident here. With New Mistakes, Lightfoot offers up something rare: the kind of genuine document that can only come from a road-tested breed of songwriter and performer. The song premiered today at American Songwriter.

Terra creates soulful rock that has landed her on stages alongside Gordon Lightfoot, Built To Spill, Guided by Voices, + more. Her most recent LP Everytime My Mind Runs Wild was released last year to critical acclaim and has already accumulated hundreds of thousands of streams. This new album sees her focusing her rock, blues, and soul influences into a clear creative vision.

Terra Lightfoot on “Paradise”: For me, “Paradise” is about letting go of perfection in love. It’s not wrestling with the problems and missteps in our relationships but embracing them. I think it's a more realistic way to look at love and it gives me some comfort to know I'm not standing there with rose-coloured glasses on.  “Paradise” actually started out as a different song called “Thunder” that was a huge hit at our shows. On the last day of tracking the record, I had this crazy idea that I wanted to change the words because I wasn’t happy with all of them, so I set up a pillow fort and a guitar in the tracking room, went to work… and ended up with a new verse melody and completely different lyrics. Gus and Werner liked the new verse so much they said, “Okay, now go write a chorus to match that verse” — and “Paradise” was born!

Our third feature for Terra Lightfoot in less than a year, this time with the new track 'Paradise'. It's a foot stomping rocker where Terra's powerfully melodic vocals, carry enough rock'n'roll edge, to blend seamlessly with the soundtrack. 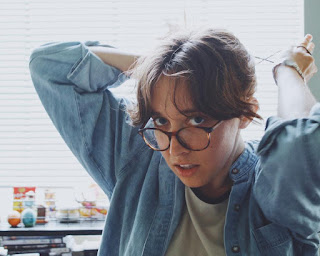 Background - Lomelda has shared "From Here," the latest from her upcoming album, Thx. She has also been announced for Mirrors Festival taking place on 28th October in London. Venue and stage time TBC.

Hannah Read, who performs under the moniker Lomelda, makes music that is textural and spacious. Her words are suggestive snapshots of loosely knitted observations, depicting quiet moments between friends and lovers and half-remembered celestial occurrences. In her songs, the memory of the past and glimpses of future stretch out on either side of you, and the present is unsteady and always shifting.

If you were to ask Hannah Read what Lomelda means, you'd probably end up with some kind of non-answer and a new topic. It is a guarded secret reserved for those who really pry. It is a high school attempt at describing something vast and powerful yet uniquely quiet and complex. And it is ever-changing. Lomelda is about memory, intimacy, and the tragedies of distance. As a band, it has appeared in several forms over the years, but always, to Hannah, Lomelda has been about discovering friendship and connection. Close collaborators have become closer friends. And when you see Lomelda, when you hear it, it is apparent that Hannah cares deeply about the connection made with the people on stage, the connection with you. Bandcamp here, Facebook here.

We featured Lomelda back in July stating then that "her vocals are gentle, a little vulnerable perhaps and beautifully melodic, supported by some fresh, intricate and understated music."  'From Here' carries a little more weight or body to the soundtrack, and Hannah Read's vocal delivery trades up accordingly to the increase in energy, doing so without losing any of her fabulously intense charm. 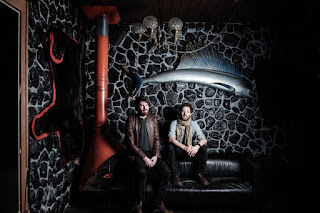 The Harpoonist & the Axe Murderer - Get Ready.

Background - Armed with a sack of harmonicas, a mess of foot percussion and a road-worn Telecaster, Shawn Hall (The Harpoonist) and Matthew Rogers (The Axe Murderer) kick out raw and primal blues while electrifying the genre with a lightning bolt of new life. Hall and Rogers limit their sound to whatever they can play between them, using only their mouths, hands and feet. Hall provides soul-tinged vocals and blues harmonica, while Rogers simultaneously lets rip on guitar and foot percussion.

These days it feels like our world is on the verge of collapse. But it’s with near-end times in the breeze  that we plunge deeper into the pleasures of sex, revelry and entertainment. ‘Apocalipstick’ begins with  the doom-laden warning call of ‘Get Ready’ (to be released as a UK single). Set to a contrastingly  bouncy drumbeat, Shawn Hall alerts us to “Get ready for the hard times / Get ready for the heavy load  / Get ready for the who knows what”. “Ben Rogers [guest vocalist] first sang ‘Get Ready’ to us by the  piano in the basement of my home,” says Hall. “It was instantly familiar to us and embodied this loose  campfire-like group vocal thing, which carried right into the recording sessions. The beauty of this song is the impression of hopefulness it leaves you while layered in a bed of chaos.” With the fate of  the world certainly in question, ‘Apocalipstick’ delves into lustful begging with ‘Pretty Please’,  summons complete heartbreak in ‘Treat Me Kind’, while ‘Nancy’ and ‘Forever Fool’ touch on themes of bullying and revenge.

Framed by psychedelic landscapes and world-ending jam-outs, The Harpoonist & The Axe Murderer ignite the gritty, blues-rock grooves they have been acclaimed for by adding drummer John Raham  (The Be Good Tanyas) and keyboardist Geoff Hilhorst (The Deep Dark Woods) into the melting pot as  well as the golden voices of Dawn Pemberton, Andrina Turenne, Alexa Dirks (Begonia), Ben Rogers,  Khari Wendell McClelland, Erik Nielsen and Ricardo Khayatte. Add equal parts soulful, sweaty vocals  and biting guitar and you have an album perfect for any doomsday date-night. Website here.

Some chunky rhythmic rock vibes, provide just the right musical arrangement for the vocals and soulful harmonies on 'Get Ready'. It's a catchy rocker where energy and passion are there in equal amounts! 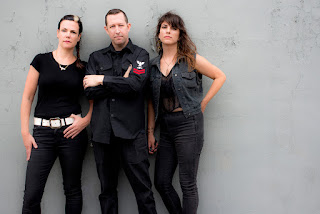 Castle Black - Trapped Under All You Know (EP).

Background - NYC’s female fronted punk-rock/grunge outfit Castle Black  have just released their new EP Trapped Under All You Know. With gritty female vocals backed by powerful but masterfully layered instrumentation, their music demands to be heard. Reminiscent of famous acts such as Sleater-Kinney, The Dead Weather, Hole, Savages, and Bikini Kill, Castle Black brings an infusion of genres and influences to their music, hurtling through social anthems and pure emotion.

The album kicks straight into gear, with the first track “Seeing In Blue” providing a driving anthem, full of lively drums, hooky melodies and demanding lyrics. The track premiered earlier this month via The Big Takeover. The album’s intriguing title, Trapped Under All You Know, comes as a line from the song “Blind Curtain”. “That line/title was decided upon because it best represented the themes of this album and the trajectory of the songs as ordered on the album,” shared vocalist/guitarist Leigh Celent.

Celent described the EP as a cohesive project, which provides a story experience when consumed in its entirety. Despite this purposeful intention, she also invites listeners to take away their own interpretations. “…while I may have written a song from a certain perspective, that doesn’t mean the words can’t be emblematic of other situations. There have been times that I’ve started writing a song about one thing, but by the time it was done, it was about something else, or a different perspective on the initial topic.”

In addition to their talented instrumentals, Castle Black utilizes vocal harmonies heavily throughout. “It’s been a running joke in the band, that if we want to add something outside of the three instruments, just ask Lisa to vocalize it! So, some of her vocal parts end up being these wordless vocals for this very reason and we like how it contributes to the overall vibe.” Website here, Facebook here.

From the first song 'Seeing In Blue' the band set out to ensure the new EP 'Trapped Under All You Know' doesn't disappoint. The mixture of frenetic punk orientated pieces alongside some hook laden grunge keeps the four song collection powerful and pleasing throughout.