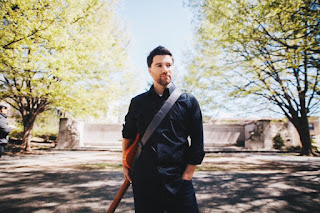 Background - It's been said that music is a universal language. Nobody understands that more than Washington D.C.-based artist Eli Lev, who crafts potent soundscapes from decades of traveling the world. "When I've been on the road and can't speak the language, I've always been able to play a song and suddenly everyone's singing and dancing.

There's a connection there, and, in that instant, there is a community," he marvels. Lev's new single "Go Down," off his forthcoming album All Roads East, is inspired by a series of baptisms that he witnessed on the Jordan River.

Eli has built a robust profile through wowing audiences whenever he picks up a guitar. Select highlights from his national and international performances include appearing at Burning Man in Black Rock City, Nevada; Music on the Mall Festival in Washington DC; Kennedy Center Millennium Stage for the METRO Performs Series; and playing at the US Capitol building at the invitation of DC Congresswoman Eleanor Holmes Norton. WEBSITE, FACEBOOK.

A slow funky opening introduces 'Go Down' soon accompanied by Eli's vocals, which maintain the feeling. The groove is beautiful, a bluesy, gentle & funk filled three minutes of natural music. 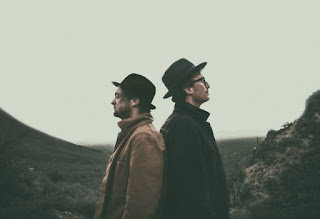 The Lost Brothers - Echoes In The Wind.

Background - There is something special about two musicians in unison. Solo artists bear the brunt of pretty much everything – be it success or failure, joy or misery, it is all on their shoulders. Groups, meanwhile, are mostly perceived as ideal examples of democracy, when the reality is that they are governed by a benign dictator (if lucky) or a cruel despot (if not). Duos, on the other hand, are clearly in tune (and harmony) with themselves and each other.

As if proof were needed, take Oisin Leech and Mark McCausland as the perfect example. Having had previous lives in major label rock acts (respectively, The 747s and The Basement), the two Irish songwriters and musicians first met in 2007 after their bands had slowly slipped off the radar. “We both found ourselves at house parties in Liverpool,” recalls Oisin, “and discovered that we had the same musical tastes. We started writing songs together for fun – no strategies, no game plan.”

The musicians’ instinctive gravitational pull presented them with the ‘Lost Brothers’ tag, but the name quickly stuck. Indeed, as the songs began to develop, the name started to make even more sense: the music was knocking on doors looking for a home, while the delivery of the songs was hushed to the point where you had to listen very carefully for the beauty of (and melancholy in) them.

The past ten years of The Lost Brothers has disappeared in the blink of an eyelid. “Many of our albums have been quite desolate,” admits Oisin, “but this one has tiny slivers of hope. We’ve been challenged, and that has made the songs richer. We have definitely polished the gloom a bit! Weirdly, it’s our most forward-thinking record.” Halfway Towards A Healing released 26th January 2018 on Bird Dog Records. WEBSITE, FACEBOOK.

Ten years on & The Lost Brothers give us even more music to love. 'Echoes In The Wind' softly mixes exquisite vocals & harmonies, above an understated musical arrangement, delicious! 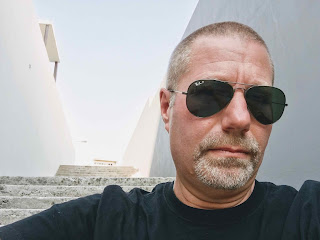 Background - The Mayhem Lecture Series 'Structures And Behaviors EPv1' is a collection of experimental tracks, which are part of an ongoing exploration of human structures and behaviors. These compositions lean heavily on appropriated found sound, field recordings, musique concrète, and process oriented experimental forms categorized into various personality traits and disorders.

The artistic inspiration for this series lies in the deconstruction of spoken word podcasts with their stereotypical approach to production, incorporating myriad vectors of dialogue with foley, background ambient noise, and contextual musical cues.

The Mayhem Lecture Series is the solo project of Dave Wesley, a veteran experimental dub techno and ambient producer and DJ. Originally from Minneapolis, he is now based in Porto, Portugal.

Apart from The Mayhem Lecture Series, Dave Wesley is known for his adventurous DJ sets, performing regularly in Portugal and Europe. He also produces under several other names: Dave Wesley (ambient dub techno), Existente (ambient), Xerography (dark cinematic techno), as well as teaming up with Casey Borchert under the moniker The Push. As an active DJ and performer, he mixes eclectic deep sets and also performs live space ambient guitar with TV Crush, an experimental and an improvisational chill music ensemble.

'Structures And Behaviors EPv1' will be released on all the major streaming and download sites including iTunes and Spotify, and will also be available on The Mayhem Lecture Series' BANDCAMP, WEBSITE, FACEBOOK.

'Structures And Behaviors EPv1' comprises of three tracks & we can share the first entitled 'Intrepid'. A creative piece of ambient imagination, the track is perhaps the easiest listen, with the two that follow drifting into more deep & artistic territory. That said I am impressed by all the material & personally this is definitely listen again material. 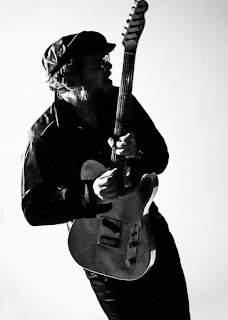 Background - Grammy winning songwriter, singer, and filmmaker, Scot Sax shares visuals for "Wes Montgomery," a track off his latest album Mr. Chocolate. Speaking on Mr. Chocolate, Sax states, “When my all time favorite artist, David Bowie passed, I decided there is no better time to be as wildly creative as when you’re still alive. I quickly wrote the songs for Mr. Chocolate and I reached out to a couple of neighbors of mine (who happen to be former Wilco drummer Ken Coomer and Bob Dylan’s former guitarist John Jackson) and said ‘we’re sixteen years old.”

An album of six still-ink-wet songs was recorded in two days in Coomer’s Nashville studio. During the sessions, Coomer asked, “what’s the name of the band?” Sax quickly drew a cartoon of himself as a sixteen year old on a scrap piece of paper and wrote Mr. Chocolate on his nametag. “That’s the band.”

“Anytime my entire life, when a sentence started off with David Bowie it was always the most exciting sentence. It meant David Bowie is going to be on TV Saturday night, David Bowie has a new record coming out. David Bowie on TV was my Beatles on Ed Sullivan. Before I even knew why, I was absolutely entranced. My older brother met him in 1974 checking into a hotel in Philadelphia and got an autograph that said, “love on ya, David Bowie,” Sax explains.

The songs that comprise Mr. Chocolate draw inspiration from David Bowie and Unknown Mortal Orchestra.  Sax incorporates strange synthesizer sounds, big, fuzzy guitars with melodic bass lines and grooving drums on Mr. Chocolate’s debut. Lyrically, his songs touch on fatherhood, “Two Under Two,” lost friendship, “Not Gonna Hate You Anymore” and the current state of the world through the lens of an adolescent with, “The World is a Teenage Bedroom.”

In the last three years alone, Sax has made the documentary "Platinum Rush," published his children’s book The Mosquito and The Bumble Bee, started a podcast with neighbor and songwriter Steve Poltz, relocated from Philadelphia to Nashville with his singer/cardiologist wife Suzie Brown and become a dad to Josephine and Chloe. BANDCAMP, WEBSITE.

'Wes Montgomery' might be inspired in part by David Bowie or Unknown Mortal Orchestra, however the song belongs to Scot Sax, who channels his inspiration beautifully. As ought to be expected with comparisons like the ones above, the track is imaginative and desirable. On the strength of this number 'Mr Chocolate' deserves a visit. 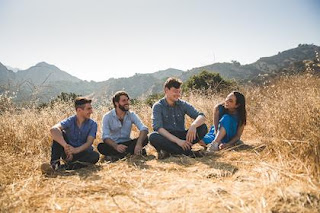 The band began life as backing Weiner’s solo album, ‘Ride The Sun’ where the group spent time rehearsing and touring up and down the West Coast. After spending hours recording and mixing tracks for this project, with long time friend Stroup and the addition of Elkin’s string arrangements, LA River Bend was born. With the introduction of their now signature three-part harmonies and Seldes on percussion, the new and improved band mastered their authentically rustic, yet beautifully atmospheric sound. Nate explains, “The addition of Seldes to the band is immeasurable, because I think our sound would have been less dimensional without his style of drumming."

LA River Bend’s upcoming EP entitled Run These Hills was entirely self-recorded by Stroup. Mastered by Grammy award-winning Eric Boulanger (Eric Clapton, Iggy Pop, Green Day), the EP has already received the stamp of approval from industry professionals. Focused thematically on the symbolism of nature based imagery, the tracks on the highly anticipated new music depicts an artfully serene feeling, reaching emotional depths. “The calming influence of nature in LA has been a huge musical inspiration to us”, professes Weiner.

Leading single, 'Summer Wind’ is the ultimate feel-good love song. Highlighting the band’s approach of exploring the new So Cal ethereal sound, the single emits a sense of ebb and flow, similar to the motion of waves crashing and sweeping against the beach. With stunning three-part harmonies, driving drum beats and catchy Californian melodies, the song builds into a fast paced, toe-tapping anthemic chorus, where you’ll find yourself incapable of keeping still. FACEBOOK.

Bright opening harmonies and vocals put the summer into 'Summer Wind' immediately. Catchy and upbeat vibes are everywhere, why over complicate things when you can deliver a refreshing hook laden song like this. 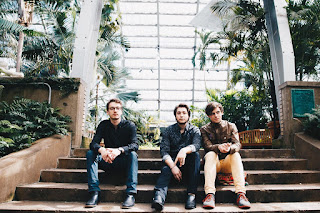 Two Sets of Eyes - For The Last Time.

In the midst of a sonic landscape between the floods and fires of Earth, a trio of friends and musicians come together to express their most prominent thoughts and feelings in song.

After an extensive year of writing and recording their self-titled debut, Chicago natives Evan Opitz (of The Phantom Broadcast, Anti/Beyond, Rebecca Rego & The Trainmen), Joel Janchenko (of Splor), and Conor Roe (of DaSHtone, Groove Cartel) bring you Two Sets Of Eyes. A progressive blend of Post Punk, Hip Hop, Pop, and Jazz. FACEBOOK.

I am always up for artists who are ready to mix the genres. 'For The Last Time' certainly does that and what's more the trio do so with a whole load of hooks and a beautiful song.